Wrote Like a Butterfly, Stings Like a Bee
How a piece of paper caused so much trouble in Florida in 2000.

November 18, 2015 - In the run-up to the presidential election, Theresa LePore was the Supervisor of Elections for Palm Beach County. She was given a list of 10 candidates whom she would have to include on her county’s voting ballots. This was an unusually large amount of candidates, and LePore realized that the only way she could get all of the names on a single page would be to shrink the font size and make the names harder to read. LePore had been involved in a federal task force to help blind and disabled voters, and she knew that her county had a large number of older voters whose eyesight wasn’t perfect. It seemed clear that making the names smaller would not be a good solution.

She also knew that she couldn’t use larger paper. The antiquated votomatic voting machines in her county wouldn’t be able to adapt, so her solution was to use a two-page ballot. That way, all the names could be displayed in a large enough font to be read by all. This was efficient problem solving at its finest—what could possibly go wrong?

As it turned out, quite a bit. It was the year 2000 and the run up to one of the closest presidential elections of all time. Democrat Al Gore and Republican George W. Bush were running neck and neck in the polls. LePore’s innovative “butterfly” ballot was about to change everything.

The infamous butterfly ballot where voters mistakenly voted for Pat Buchanan instead of Al Gore.
On November 7, 2000, over 6 million Floridians cast their vote for president, and the results were so close that several recounts were needed to sort it all out. Both parties sent in teams of lawyers to witness the counting because the fate of the presidency hung in the balance. With all of the other states having already reported their results, it was clear that whoever won Florida would win the White House. During the ruckus, President Clinton famously quipped, “The American people have spoken, we’re just not sure what they said.” It wasn’t until December that the Supreme Court stepped in and ended the mania. The landmark Bush v. Gore decision stopped the recounts and allowed Bush to declare victory. He had officially won Florida by 537 votes, a margin of 0.009%.

During the chaos, people of every political persuasion donned the hat of conspiracy theorists. Republicans thought there was a plot to not count military absentee ballots, which they believed would help Bush. Democrats were suspicious of Katherine Harris, the Republican Secretary of State, who seemed hell bent on stopping the recounts before Gore could catch up. Chief among the list of scapegoats was the Green Party candidate, Ralph Nader, who received well over 100,000 votes in Florida (some of those voters plausibly would have voted for Al Gore had Nader not gotten in the race). 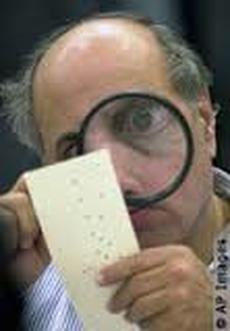 A Florida judge examines a punch card ballot during the state's election recount in 2000,
However, arguably the most impactful scandal that surrounded the Florida election occurred in Palm Beach County. The culprit? The ballot itself.

As early as 10AM on Election Day, voters began coming into LePore’s office to complain about being confused about the ballot design. Gore’s name was written just below Bush’s in the left-hand column, but if you punched the second hole on the ballot, you would actually be voting for Pat Buchanan, who was listed on the top of the right-hand column.

The fact that many Palm Beach voters accidentally voted for Pat Buchanan is pretty hard to argue. The candidate himself admits that it is unlikely that so many voters in the heavily Jewish county would vote for him rather than the ticket with Joe Lieberman, who might have been the country’s first Jewish Vice President. In all, Buchanan received over 3,400 votes in Palm Beach County, representing about 20% of his statewide total and over 2,000 more votes than he got in any other county in Florida.

For her part, LePore was sued at least 25 times by over 20,000 voters, who claimed that she disenfranchised them by using the new ballot design. Meanwhile, the media dubbed her “Madame Butterfly,” and close friends told her she should resign. Despite being a lifelong Democrat, a theory began circulating that she had been paid off by the Bush campaign to rig the vote (a conspiracy that would have been incredibly farsighted because it would have entailed months of preparation in order to rig only 1 county out of 67 in Florida).

LePore stayed on as the Supervisor of Elections until she lost reelection to her third term in 2004. In the months after the election, an overwhelming bipartisan vote in Congress passed the Help America Vote Act (HAVA). The law authorized $3.65 billion to help states update their voting machines, train their staff, and generally improve the voting process. Many of the votomatic and punch card systems (that were so troublesome in 2000) were replaced by optical scan ballots and electronic voting machines.

While this may have solved one problem, many experts fear it has started another. The modern electronic voting machines have lifespans of only 10 years, and most of the HAVA money has already been spent. There is no telling what will happen when the machines start to break down and there is no money available to repair them.

Over a decade and half since 2000, next year’s election is sure to bring out a large voter turnout, and if current opinion polls can be believed, will likely be decided by a close margin. One must ask the question: What could possibly go wrong?

*Another through line that connects the butterfly ballot to today is the fact that, in 2000, Jeb Bush was Governor of Florida. Per state law, the Governor’s party is listed first on ballots. So, had Jeb Bush not been Governor, his brother's ticket would have been where the Al Gore ticket was on the butterfly ballot, and many George W. Bush supporters very well may have accidentally voted for Pat Buchanan.